Did diseases decline because of vaccines? Not according to history…

“VACCINATION DOES NOT ACCOUNT FOR THE IMPRESSIVE DECLINES IN MORTALITY SEEN IN THE FIRST HALF OF THE CENTURY…NEARLY 90% OF THE DECLINE IN INFECTIOUS DISEASE MORTALITY AMONG US CHILDREN OCCURRED BEFORE 1940, WHEN FEW ANTIBIOTICS OR VACCINES WERE AVAILABLE.” —

ANNUAL SUMMARY OF VITAL STATISTICS: TRENDS IN THE HEALTH OF AMERICANS DURING THE 20TH CENTURY, JOURNAL OF AMERICAN ACADEMY OF PEDIATRICS, DECEMBER 2000

THE FACTS ARE CLEAR: INFECTIOUS DISEASE DEATHS DECLINED NEARLY 90% BEFORE VACCINES WERE INTRODUCED…

Dr. Lawrence Palevsky, a well-respected pediatrician and fellow of American Academy of Pediatrics, discusses how disease mortality declined well before the introduction of vaccines in this one-minute MUST-WATCH video. 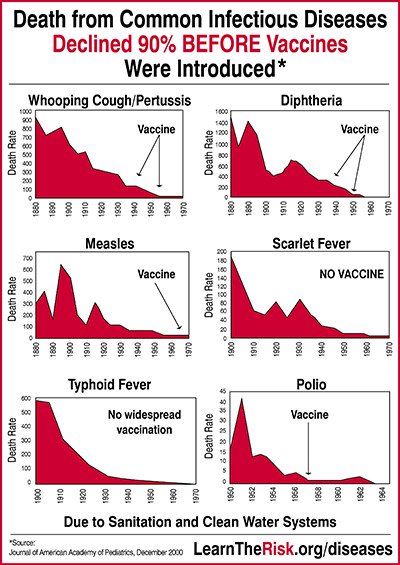 *Refer to the column on the right for the original images

In the United States (and other countries), historical records show that disease mortality declined nearly 90% before the introduction of the vaccine program and routine vaccination programs — as stated in the Trends in the Health of Americans report.

In fact, some of the most prevalent diseases in the early 1900s — including Tuberculosis (TB), Scarlet Fever and Typhoid — followed the same declines WITHOUT ever having a vaccine program (in the US). These diseases were nearly eradicated in the U.S. without the population being vaccinated for them. (See graph)

How is this possible? The pharmaceutical/medical industry has spent MILLIONS convincing us that vaccines saved us all from imminent disease death, but history proves this is more of a marketing tactic than a fact. A marketing tactic that helps ensure the nearly $60 BILLION vaccine market keeps growing.

WHY DID DISEASES DECLINE?

By 1900, however, the incidence of many of these diseases had begun to decline because of public health improvements, implementation of which continued into the 20th century.

Local, state, and federal efforts to improve sanitation and hygiene reinforced the concept of collective “public health” action (e.g. to prevent infection by providing clean drinking water). By 1900, 40 of the 45 states had established health departments. The first county health departments were established in 1908 (6).

Tuberculosis Declines WITHOUT A Vaccine

The incidence of Tuberculosis (TB) also declined as improvements in housing reduced crowding and TB-control programs were initiated. In 1900, 194 of every 100,000 U.S. residents died from TB — the second leading cause of death — and most were residents of urban areas.

In 1940 (before the introduction of antibiotic therapy), TB remained a leading cause of death, but the crude death rate had decreased to 46 per 100,000 persons. There was never a vaccine for Tuberculosis in the United States. Yet other countries TB rates also decreased before the TB vaccine was introduced. 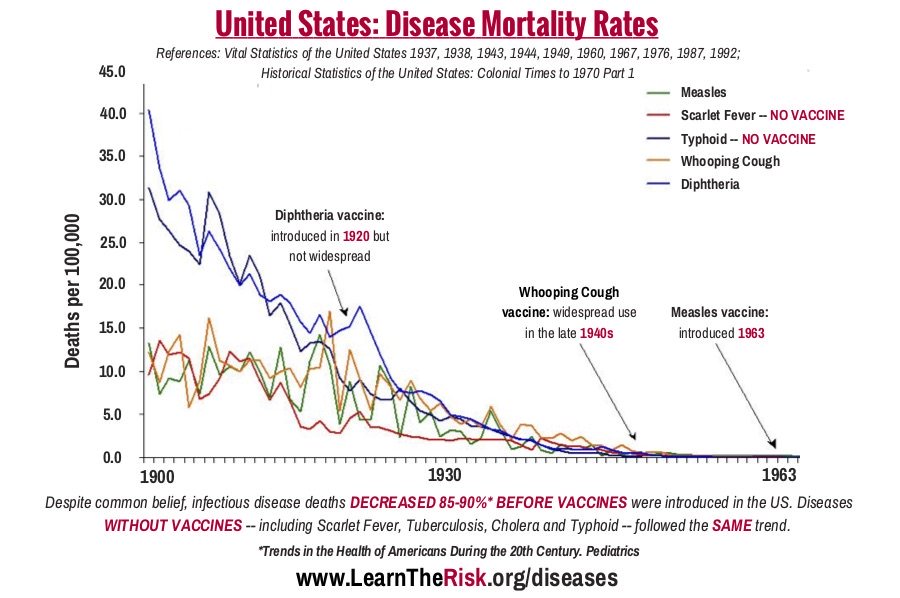 Did vaccines save us? The evidence speaks for itself. Read the report HERE!

WHAT DOES THE CDC SAY? IT CREDITS CLEAN WATER, NOT VACCINES…

This report from the Center for Disease Control in the US clearly shows that the decline in disease was due to clean water systems and sanitation — NOT vaccines. This report was written before the CDC became grossly intertwined with the pharmaceutical industry. 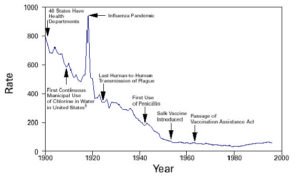 Quote from the CDC report (NOTE there was NEVER a vaccine program in the US for typhoid and cholera):

It is because of these successes that we can celebrate over a century of public drinking water disinfection and treatment – one of the greatest public health achievements of the 20th century.” 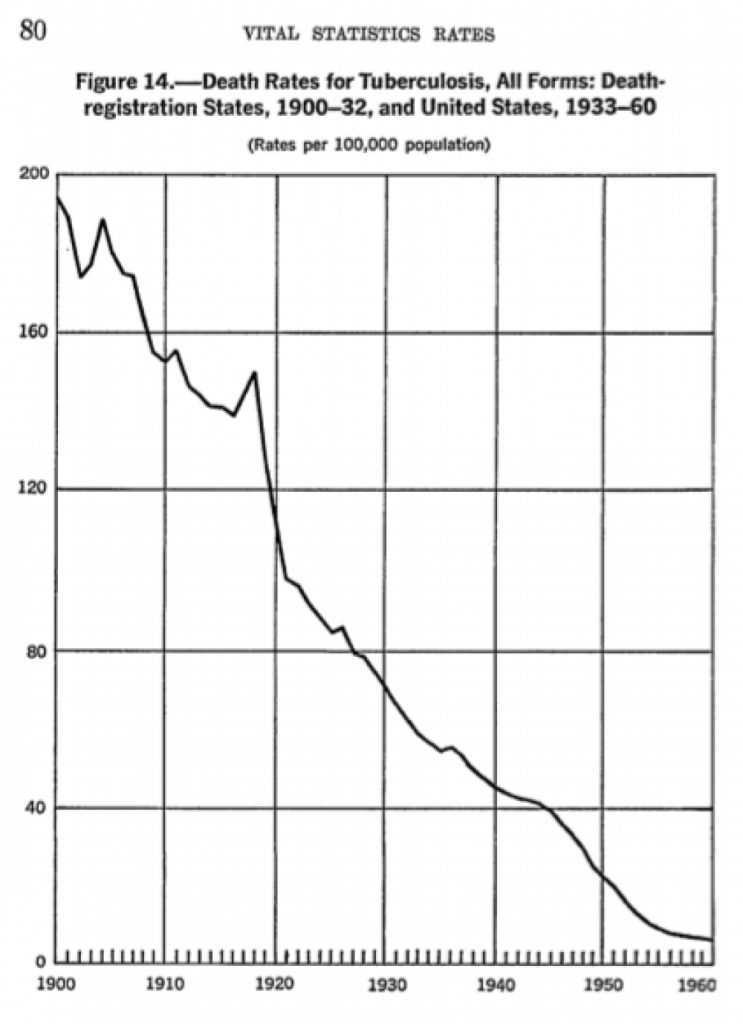 BCG (TB vaccine) was introduced in 1953, after TB had already declined 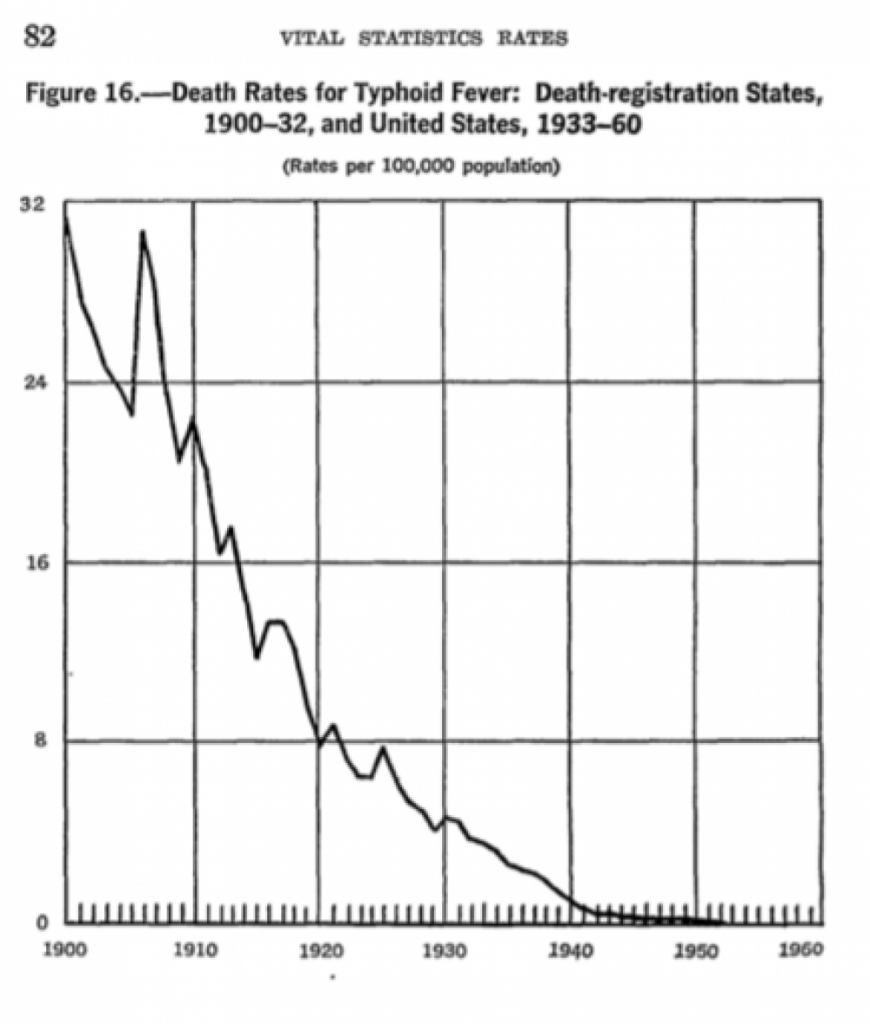 No widespread vaccination program for Typhoid but the disease still declined 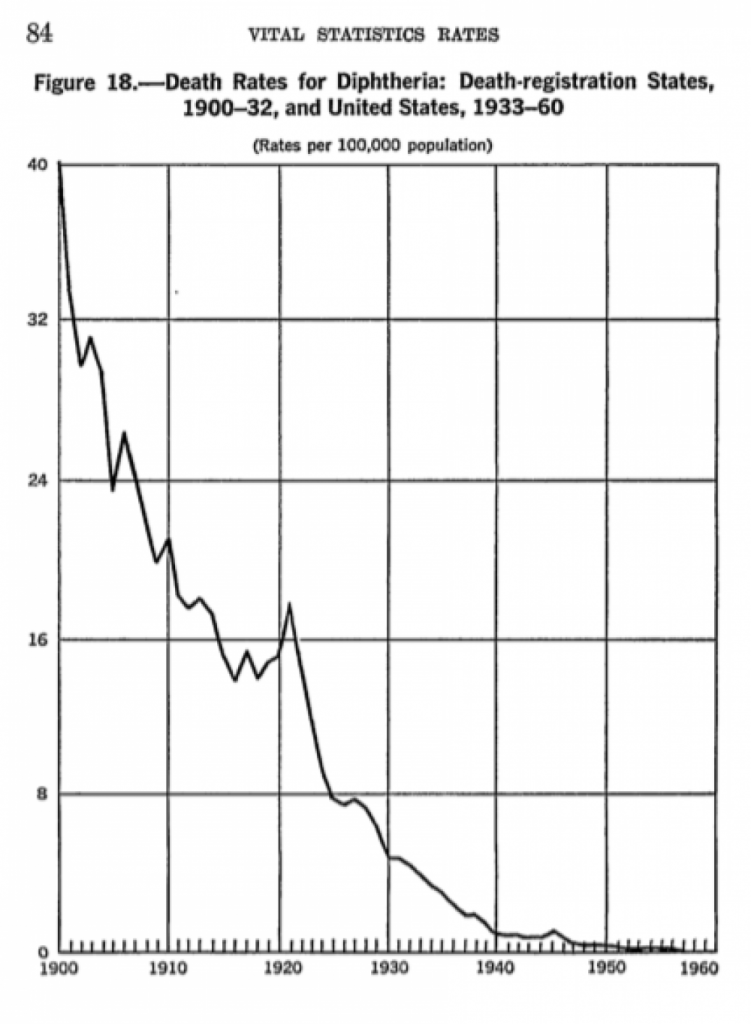 Diphtheria vaccine was created in the 1920s but not widespread until 1949, well after Diphtheria had already declined 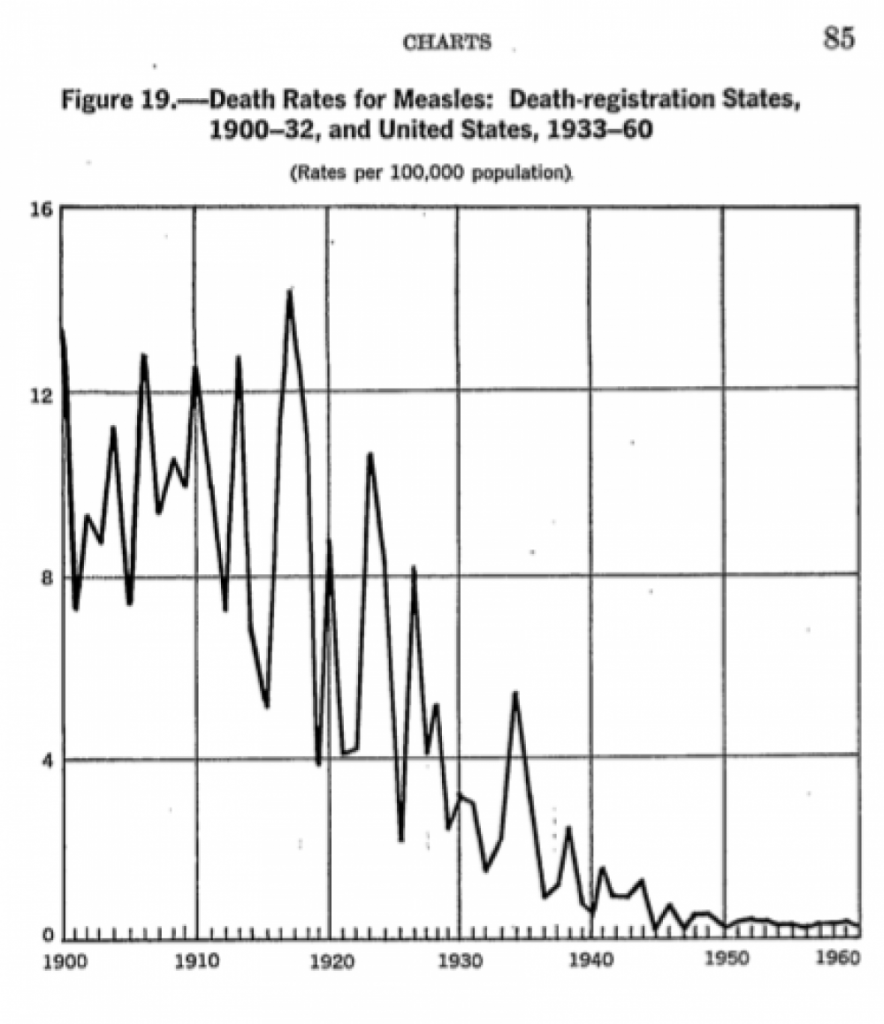 Measles vaccine was introduced in 1963, after Measles deaths had already declined 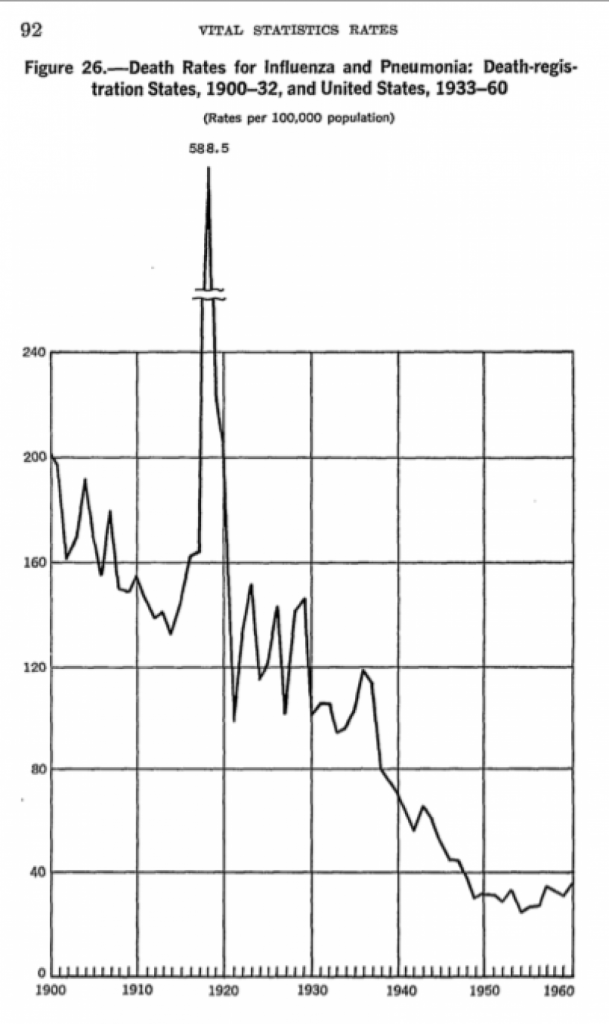 STUDIES AND REPORTS SHOWING THE DECLINE OF DISEASE DEATHS BEFORE VACCINATIONS:

The decline of adult smallpox in eighteenth-century London

This study shows smallpox mortality declined before the vaccine was introduced.
https://www.ncbi.nlm.nih.gov/pmc/articles/PMC4373148

Annual Summary of Vital Statistics: Trends in the Health of Americans During the 20th Century

“Vaccination does not account for the impressive declines in mortality seen in the first half of the century…Once again nearly 90% of the decline in infectious disease mortality among US children occurred before 1940 when few antibiotics or vaccines were available.”
http://pediatrics.aappublications.org/content/106/6/1307

BUT WHAT ABOUT POLIO?

This is the question we always hear. First, it’s important to note that Polio is a very common virus, much like a cold or flu virus. Most Americans had/have the polio virus in our bodies at some point, although we are never tested for it unless we have paralysis. We all have dozens of different viruses in our system at one time because that is how nature keeps our immune systems stimulated.

The paralysis that was blamed on the poliovirus in the 1940s and 50s was actually due to the widespread chemical/pesticide spraying of DDT, a highly toxic (now banned) pesticide. 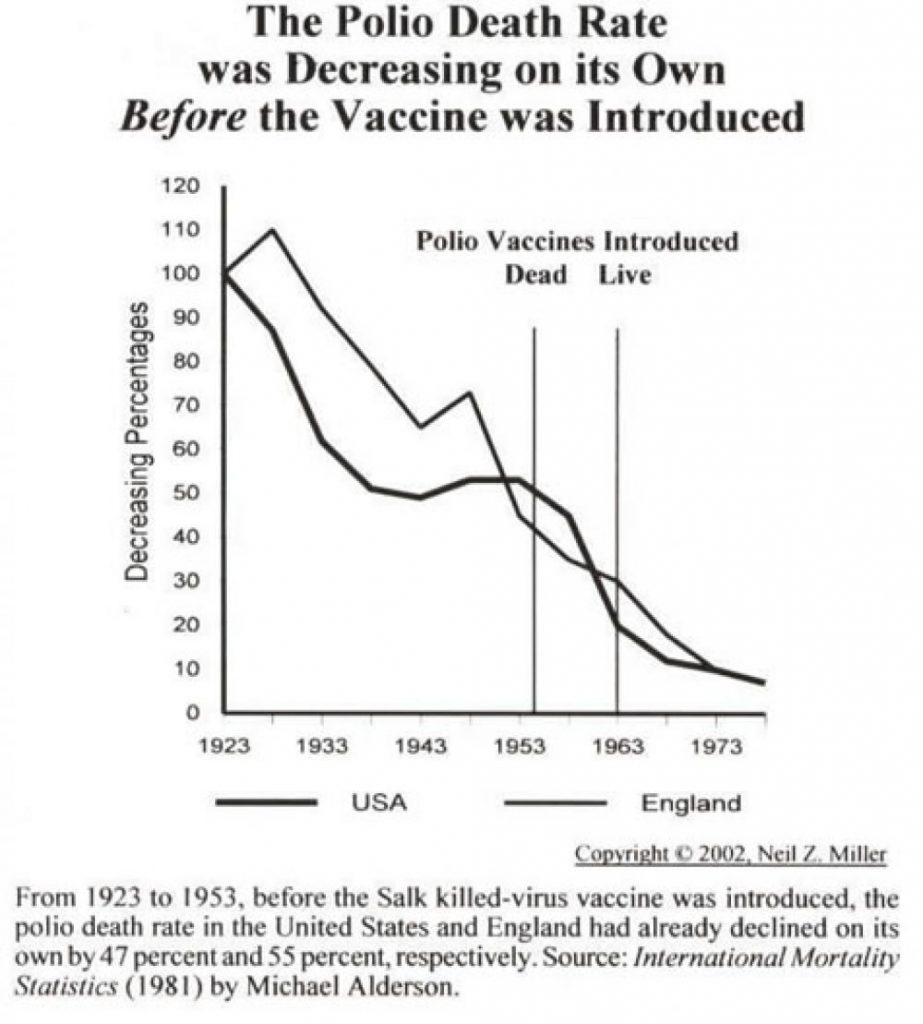 But the US government and health departments, along with chemical companies, were encouraging the spraying of DDT on the American public. Mass DDT spraying campaigns took place on beaches, aerially over swimming pools and parks — especially during the summer months (aka farming season). Coincidentally most “polio” paralysis cases happened during the summer months and in children. Parents were even encouraged to spray their children directly with the highly toxic chemical as well as put it in baths and other places where children had direct contact with DDT.

As the weather warmed up each year, panic over polio intensified. Late summer was dubbed “polio season.” Public swimming pools were shut down.” — NPR, Chasing Down Polio, October 2012 report 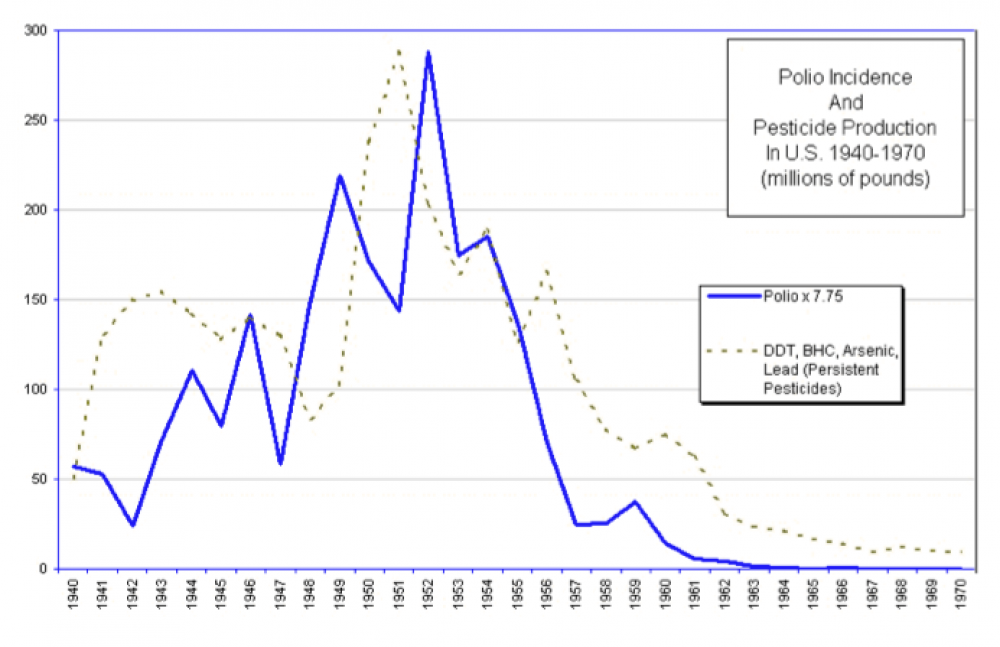 Polio increased with the introduction of DDT and started declining before the polio vaccine was introduced. Click here for more.

In the mid-1940s, scientists began to alert the government and Congress that DDT spraying was causing a huge increase in paralysis and nervous system damage. But the US government, on the back of World War Two, couldn’t admit their mistake — a mistake that would have cost them MILLIONS in damages through lawsuits from those affected.

Someone then had the brilliant idea to quietly start exporting DDT instead of spraying Americans, slowly ban DDT as not to cause alarm and promote a “solution” in the form of the polio vaccine.

It’s one of the most shocking and most commonly believed medical myths, which is still regularly repeated on television, in history books and by an unaware public that never bothers to look beyond the charade.

Pharmaceutical companies and the medical system love to vilify viruses, but are they really bad for your body? Science is discovering there are many benefits to common illnesses, particularly in childhood, and theorize that viruses actually help train the immune system in a way that can REDUCE the risk of more serious issues later in life, including cancer.
Yes, you read that right: natural viruses can PROTECT from disease later in life.

For thousands of years, humans have lived synergistically with viruses and bacteria. And now science is discovering that they actually serve a purpose on our journey to transformation and health.

WHY AREN’T WE AFRAID OF ALL DISEASES?

The only diseases we fear are the ones that a vaccine has been developed and marketed for. We never feared measles and mumps in the early 20th century… the media tells us what to fear, so they can then sell you an alleged solution.

There are literally THOUSANDS of diseases. Take Leprosy for instance.

How many parents walk around daily concerned about their child contracting leprosy? But, it still exists – by the thousands in various parts of the world. The United States has roughly 200 cases every year. Did you know that? Probably not…

Because there’s no vaccine for leprosy.